BUGDERM Cream is triple drug combination of Clotrimazole, Beclomethasone and Neomycin.
Clotrimazole, an imidazole derivative with a broad spectrum of antimycotic activity. Betamethasone and clotrimazole are used together to treat cutaneous tinea infections. Beclomethasone is a glucocorticoid receptor agonist that relieves the symptoms of a flare-up by reducing inflammation, itching and redness. Neomycin is an aminoglycosides useful primarily in infections involving aerobic, Gram-negative bacteria and Gram-positive bacteria. 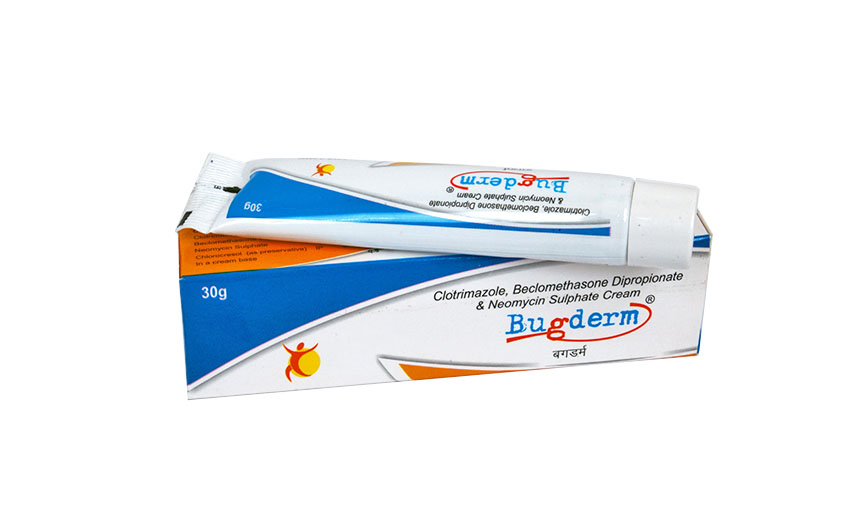 Clotrimazole is anti-fungal, Beclomethasone dipropionate is a steroid, Neomycin is an aminoglycoside antibiotic.

BUGDERM Cream can be used in the treatment of following conditions:

Apply BUGDERM Cream gently to the affected part 2 times a day for 2-4 days, depending upon severity of condition.

Clotrimazole that works by killing individual Candida or fungal cell by altering the permeability of the fungal cell wall. It binds to phospholipids in the cell membranes and inhibit the biosynthesis of ergosterols and other sterols required for cell membrane production. Neomycin bind to specific 30S-subunit proteins and 16S rRNAof the bacteria for the treatment or prevention of bacterial infections. Beclomethasone is an anti-inflammatory actions of corticosteroids are thought to involve lipocortins, phospholipase A2 inhibitory proteins which, through inhibition arachidonic acid, control the biosynthesis of prostaglandins and leukotrienes.